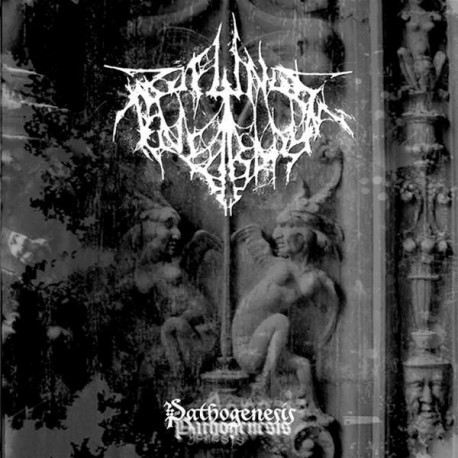 The first few seconds of 'Morbid Martyr To Forget' actually make me grin due to just how traditionally, even stereotypically EVIL it sounds; it's like the classic silent horror film soundtracks elevated a thousand levels and with a dash of Dark Funeral thrown in to add the appropriate amount of dark grandeur. One could tell that Profundis Tenebrarum was moving in a more aggressive, Norwegian-inspired direction with their contributions to the 'Hell Bestial Conjuration' split, but I don't think anyone could have anticipated just how forceful they would get on their second full-length. This is sleek and modern, but more importantly, violent black metal which just seethes with absolute hatred for Christianity and all human life in general. This isn't a unique piece of black metal, but damn if it's not effective.

Profundis Tenebrarum's early material was subtle and melodic black metal filled with nocturnal atmospheres and a potent sort of mysticism. On 'Pathogenesis', the band decided that subtlety was for pussies and that blasting was cooler. Surprisingly enough, this ISN'T a change for the worse! Profundis Tenebrarum pulls off some great blasting black metal on 'Pathogenesis', and what it lacks in complexity it makes up for in blistering intensity. Heavily derived from the Dark Funeral mold of speedy and dogmatic black metal, this is fast and melodic music centered on dark riffing and throat-searing vocals. The riffs on 'Pathogenesis' would not seem at all out of place on 'Diabolis Interium'; a very similar melodic sense is used and the song structures are not at all unlike each other, with similar usage of halted drums being used to build tension and a constant flurry of tremolo riffs assaulting the listener through a clear and crisp wall of production. Profundis Tenebrarum's style of riffing might be a bit more complicated; the guitars will actually move in some rather unpredictable patterns at times, as will the song structures, which are willing to change suddenly and irrevocably and place the listener in a rather different place than they started.

Despite this complexity, the music is rather simple and carnal in nature; a lot of the joy one gets from this release is based on the aesthetic alone. 'Pathogenesis' has a particularly ripping quality to its songs, and the band seems completely unwilling to slow down apart from on a couple ambient tracks which help break up the nonstop intensity of the music. This is rather basic black metal and it doesn't have a lot of unique elements apart from a bit of the traditional Spanish BM flair here and there, but it's enormously consistent, professionally made, and unfailingly satisfying throughout. I can't imagine the sort of modern black metal fan who wouldn't find themselves enjoying this release greatly.

'Pathogenesis' is a very good, but not great album. Ironically, this is a great thing because it goes to show that black metal is not split horrendously between legions of mediocrity and a few geniuses: there's people making solid and engaging black metal at every level of the game, and Profundis Tenebrarum is at the top of that 'extremely competent' heap. This is worth a look from any black metal fan: it's a very good album packed to the brim with memorable riffing and great compositional decisions, and it deserves much more attention than it's getting, particularly when coming from the mostly stagnant Spanish scene.