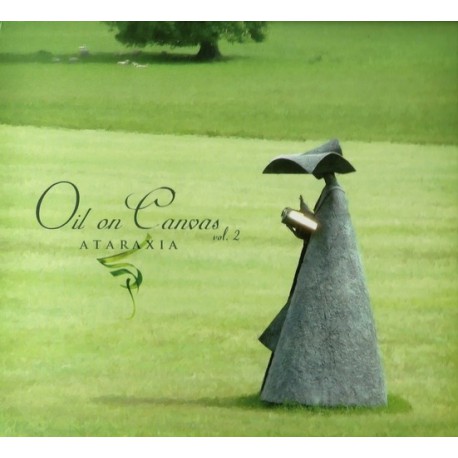 This is the " OIL ON CANVAS VOLUME II " with 5 unreleased tracks. The compilation include instead of a conver version for piano of Lucretia that will be included in Il Fantasma dell'Opera in the near future , Ataraxia thought to include a completely exclusive new song called SUBLIMATIO, + a few of the tracks already compiled on the original Oil on Canvas, + several new songs never compiled before especially belonging to the last productions of the band (Kremasta Nera, Llyr, Spasms, Wind at Mount Elo), so it will be a sort of going on of the previous compilation with a brand new vein.... the lay-out will be a slight variation of the first Oil On Canvas beuatiful pictures of Mick Mercer. The cd comes in a beautifull gloosy digipack , limited to 500 copies.

track list:
01 Sublimatio (exclusive)
02 Of Asphodel (from Saphir)
03 The bay is white in silent light (from Vittorio Vandelli's solo album)
04 Donc, je dois etre morte (from Spasms)
05 Lunar Oceans (only in a previous cmpilation)
06 Rashan (exclusive for Oil On Canvas I)
07 Evnyssien (from Llyr)
08 Temenos (exclusive for Oil On Canvas I)
09 la Fame e la Danza (from Kremasta Nera)
10 Lost Cosmonaut (from Wind at Mount Elo)
11 May she become (only in a previous chinese compilation)
12 Whisper o'er the sea (from Vittorio Vandelli's solo album)