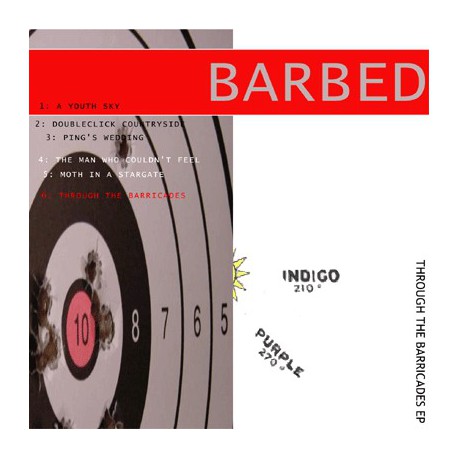 Barbed - Through The Barricades EP

10” vinyl EP travel document #6 Little Fort Knoxes…. Barbed are Alex Burrow and Alex McKechnie. They formed in London in 1988, and spent the next six years working on their "album". During that time they worked pretty much 14 hours a day, seven days a week. They didn't go out or see anyone. Their high concept was to avoid cliche; create a music they'd never heard before and which worked completely in its own space by its own rules. Thanks to the amazing patience and encouragement of These Records (or Recommended Records as they were known then) the album finally appeared in 1994. Where it got reviews, it got great reviews, but otherwise it fell on deaf ears. Shortly afterwards, the term 'plunderphonics' came into being (or shortly before - who's counting?) and Barbed were taken in by this new gang. Happy to be accepted somewhere (even though they had no interest at all in the genre) Barbed tagged along and collaborated in arduously long concerts with Negativland, People Like Us and the Tape Beatles, resulting in a few live recordings and some subhuman contact. Meanwhile, they continued producing low quantities of high quality material, and generally wasting time on dead ends. That's the trouble with experimental music: not all experiments are successful. Around 1998 disaster struck and Barbed joined the band Add N to X (it was supposed to be just one concert but they ended up staying a year). No recordings survive from this period. Another, more successful diversion came in the form of a collaboration with Joram ten Brink. They spent more than a year doing the soundtrack for his arthouse classic ‘The Man Who Couldn’t Feel’, which divided audiences at the Berlin Film Festival in 1997. In the ten years between the album and now, they've leaked their material out to various compilations, live records & remixes, and in 2000 a single appeared on elevatorbath records. So here we are in 2007. That upbeat 2nd record is finally out on LOaF, plus a collection of eccentric short pieces on a pleasing ten inch soon to arrive on aufabwegen. If you're too poor to pay, check out the archives with Snails and Relics - two free mp3 albums available here. The various threads they've been working on these past years have finally come together, and all of a sudden there's a new collection that makes sense. This year will be a high point in the lives of all Barbed lovers. The results of their experiments released at last. PS: they've just gone disco.