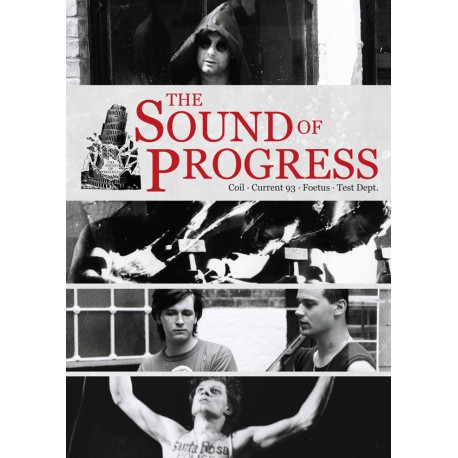 The Sound Of Progress (DVD)

The official release of the infamous 1988 film THE SOUND OF PROGRESS. This DVD has been completely remastered / authored from the original master film stock. The documentary shows the mindset of the some of the most original and influential artists of the experimental scene. An unprecedented insight into the workings, the methods and the ideas that made these names legendary. Filmed in Hamburg, Amsterdam and London.

Test Dept at A Good Night Out, De Olyphant, Amsterdam, Holland, March 1987. Test Dept. were filmed in a deserted harbour area of Amsterdam where empty buildings were used for concerts and performances. One of the buildings was called De Olyphant, named after the name of the street, Levantkade (now a gentrified neighbourhood). They were interviewed just before the concert in the same place.

Coil was filmed (the dinner) at the home of Peter Christopherson and John Balance (Chiswick, London, England) in 1986, and inside Sam Therapy studios during the recording of 'Horse Rotorvator'. The interview with John Balance and Stephen Thrower was in the courtyard of the studio during a break from recording, 1986.

"The Sound of Progress is vital watch for anyone interested in the esoteric counter-culture. It shows a movement that impacted so many at the time (and continues to do so via the albums that these artists released) and still resonates to this day... A great film and one that is highly recommended." (Louder Than War)

"It is great to see these angry young men hammering out their statements on what we may now see quite differently. Maybe the world of 1988 wasn't that bad compared to 2016, with more and more poor people feeling dissatisfied and demanding (and getting!) strong leadership. The cold war ended and is now replaced by just coldness and love (Crass!) seems far away... there is no authority than yourself" (Vital Weekly)