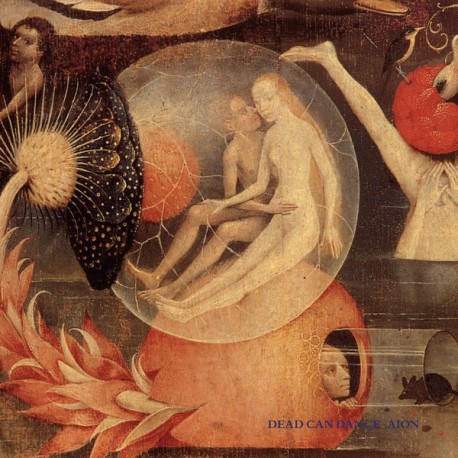 Aion is the fifth studio album by Dead Can Dance, released on 11 June 1990 by 4AD. The first album Lisa Gerrard and Brendan Perry wrote after the end of their romantic partnership, it was recorded at Perry's new estate, Quivvy Church in Ireland, and at Woodbine Street Recording Studios in Leamington Spa.

The album cover shows a detail from the Dutch painter Hieronymus Bosch's triptych The Garden of Earthly Delights (specifically, its central "Earth" panel).

On this album, Dead Can Dance explored early music to a greater degree, including medieval music and Renaissance music, as Perry noted, "synonymous with the Bosch period"; this included pieces like the 14th-century Italian dance instrumental ("Saltarello") and 16th-century Catalan ballad ("The Song of the Sibyl"), lyrics from 17th-century Spanish baroque poet Luis de Góngora ("Fortune Presents Gifts Not According to the Book"), and instrumentation such as hurdy-gurdy and viols.