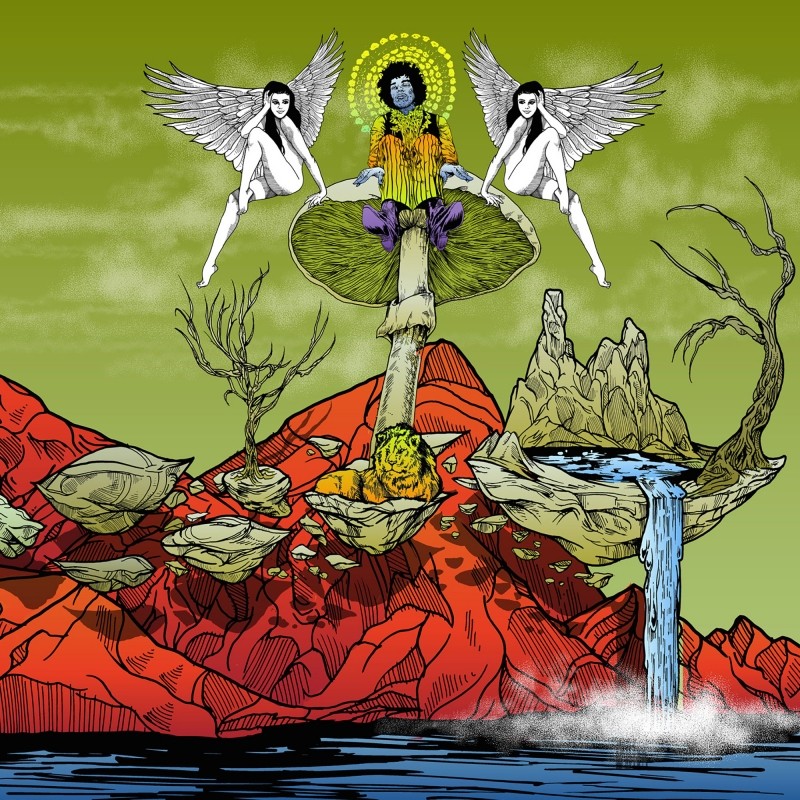 From The Obelisk 8/24/2015
Even before you press play on Electric Ladyland [Redux] or its companion piece, The Best of James Marshall Hendrix, it’s hard not to admire the coordinating prowess of Magnetic Eye Records in making it all happen. Most people couldn’t corral three bands to put together a single show bill, and the label’s Mike Vitali has wrangled 20 acts from the US and European heavy rock underground to pay homage to Jimi Hendrix in time for what would’ve been the supra-legendary guitarist’s 75th birthday, topped it of with artwork by David Paul Seymour, whose piece for Electric Ladyland [Redux] easily stands among the best covers of 2015, and Caitlin Hackett, whose three-eyed-bird portraiture perfectly suits Hendrix‘s groundbreaking psychedelic blues. Packaged separately on 2CD and 2LP but clearly intended as complements, both tribute collections showcase staggering ambition on the part of the label putting them together, and the fact that Electric Ladyland [Redux] and The Best of James Marshall Hendrix materialized at all is an automatic, unqualified triumph. Here are the full tracklistings:

As I said, staggering. Even more so in the case of Electric Ladyland [Redux], since not only do the usual comp and tribute album concerns apply of getting everything together and turning it into a cohesive listening experience, but also because in paying homage to a full-length album specifically, it’s also pivotal that Electric Ladyland [Redux] flows front to back while being comprised of 16 separate recordings taking place in 16 separate studios with 16 separate performances and treading on some of rock and roll’s most sacred, pivotal ground. Covering Hendrix? Unless you’re Stevie Ray Vaughan — and hell, even if you are — it’s a tricky proposition for one song, let alone a full record. It’s like someone asked Magnetic Eye if they wanted to go mountain biking and the label built a rocket, went to Mars, terraformed the planet and then decided to tackle Olympus Mons, on a Huffy.

Okay, an exaggeration, but you take my meaning. And Electric Ladyand [Redux] mostly succeeds in its decidedly Herculean mission. There are one or two changes that come across choppy — an early one in the jump from the groovy vibes of Elephant Tree and Open Hand into the burlier Superchief, who give an able showing of what they do but ultimately feel out of place — but on the whole, it’s hard to argue with the results as they’re presented throughout, whether it’s King Buffalo‘s dreamy “House Burning Down” or groups making the material their own, like Wo Fat‘s “Gypsy Eyes,” Summoner‘s re-envisioned “1983… (A Merman I Should Turn to Be)” and Gozu‘s adventurous “Rainy Day, Dream Away,” which leads off the second CD of the collection after Mos Generator‘s “Burning of the Midnight Lamp” finds the Washington-based act showing the roots of their own approach to landmark hooks, as do Mothership with their “Still Raining, Still Dreaming.”

Hearing Earthless with vocals is something of a surprise, and their take on “Come on (Let the Good Times Roll)” (an Earl King cover) not only is true to their Hendrix influence, but is a decided showcase of just how influential they’ve been on the West Coast underground — there are a good number of bands out there striving to sound like Earthless covering Jimi Hendrix — and having Swedish rockers Tunga Moln perform “All Along the Watchtower” in their native language puts an unexpected spin on arguably Electric Ladyland‘s most recognizable piece. All Them Witches are right in their element jamming on “Voodoo Chile,” and Elder do justice to the album’s closer in their “Voodoo Child (Slight Return),” capping the tribute with one last highlight to round out the many before it.

There are several acts who reappear on The Best of James Marshall Hendrix, including Wo Fat and Elephant Tree, but as the latter only had the intro “…And the Gods Made Love” to lead off Electric Ladyland [Redux], it seems fair enough. In the case of Texas fuzz forerunners Wo Fat, I’m not at all going to fight with their extended jam on “Gypsy Eyes” as it closes out The Best of James Marshall Hendrix, and their 12:49 run through “Machine Gun” suits just as well. Leading off the companion tribute are Australian blues rockers Child, who give “In from the Storm” due soul and sway, and after Elephant Tree‘s “Manic Depression” and Wo Fat‘s “Machine Gun,” hearing Stubb take on the sweet melodies of “Little Wing” couldn’t be more perfect, especially leading into Rosy Finch‘s stomping “Foxy Lady,” which in turn gives way to Geezer‘s “Little Miss Lover,” coated in wah and right in the New York band’s wheelhouse, even as it gives way to a deconstructing long-form fadeout.

Wo Fat‘s extended “Gypsy Eyes” picks up from that silence with a bonus track-style vibe, but really, both releases feel like a bonus the whole time through. There are some variances in sound and style and some bands are more suited to the source material than others, but the effort that has been put into Electric Ladyland [Redux] and The Best of James Marshall Hendrix and the passion that bleeds from every second of each of these tracks are simply inarguable. It may be preaching to the choir to have heavy rock and psych bands covering Hendrix tracks, but the vibe throughout both of these tribute comps is much more of a genre paying homage to one of its founders who, sadly, didn’t live long enough to see the generation-spanning impact of his work realized. Equally admirable in mission and execution.