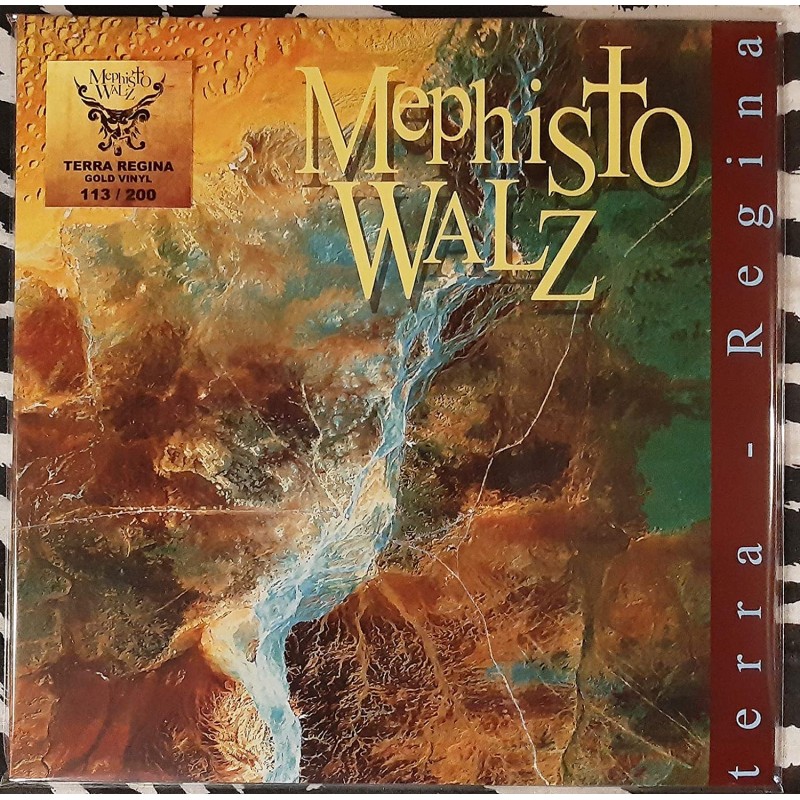 The new re-release by Mephisto Walz for the fist time on vinyl. It comes out in three different colors all strictly limited and numbered. Gatefold cover including lyrics. Gold vinyl limited 200 copies.

Mephisto Walz was formed in 1986 by Barry Galvin (aka Bari-Bari) and John Schuman (Johann), following their departure from the influential deathrock band Christian Death. Bari-Bari had joined Christian Death as bassist while the iconic Rozz Williams was still vocalist (Williams left the band in 1985, with guitarist Valor Kand becoming its lead singer and principal songwriter).

Christian Death's 1985 album "Atrocities" and the EPs "The Wind Kissed Pictures" and "Believers of the Unpure" featured Bari-Bari, Johann (bass), and David Glass (drums), all of whom would feature in one or more incarnation of Mephisto Walz.

Following conflict with Kand, Bari-Bari and Johann departed Christian Death. The band’s 1986 album "Atrocities" includes several tracks composed by Bari-Bari, notably "Tales of Innocence", "Strapping Me Down", and "Silent Thunder". Additionally, 1985’s "The Wind Kissed Pictures" EP features Bari-Bari's "The Wind Kissed Pictures" and "Lacrima Christi", while the "Believers of the Unpure" single, released in ’86, includes his composition "Between Youth".

The first incarnation of Mephisto Walz started in Dusseldorf in February 1986, with original members Bari-Bari (the band’s sole songwriter), Johann, and Arndt (drums), plus a German vocalist called Jörge. The name Mephisto Walz was proposed by Johann. They rehearsed songs mainly written by Bari-Bari, but also added soundscapes such as “Aboriginee Requiem”. The band’s eponymous debut album was released on Italian label Supporti Fonografici that same year. In 1987 they moved to Los Angeles, without Johann.

In 1988, Bari-Bari started working on tracks with Steven Grey in Hollywood at a studio where the former worked. They regrouped with David Hermon (bass), Mondo (vox) and Nariki Shimooka (guitar). Playing the first EP and some of Bari-Bari's Christian Death material they added new songs that would later be released on the “Crocosmia”, “Terra-Regina” and “Thalia” labels. During this period, what would later become "Mephisto Walz Rarities 1989" were recorded live in studio.

In 1991, Christianna was brought in as vocalist as Bari-Bari felt that male vocals were too similar to Williams and Christian Death. William Faith was added on bass at the same time. An association with Gymnastic Records was started with the compilation "American Gothic", which featured Mephisto Walz’s "Tangia". “Crocosmia” was then recorded for European release, consisting of new tracks and some older tracks redone with Christianna on vocals.

In 1992, a co-headlined tour with Shadow Project (featuring Williams and Eva O) brought Mephisto Walz back to Germany, where they stayed and recorded "As Apostles Forget". Bari-Bari also wrote part of what would be “Terra-Regina” and “Thalia”, before returning to the U.S.
In Los Angeles, Johann and Glass were available again and replaced Faith and Grey. Work then began with Bari-Bari and Christianna on the next three complete releases - "Eternal Deep", "Terra-Regina" and "Thalia", through new label Cleopatra Records.

For the next few years, Bari-Bari played and recorded with Scarlet’s Remains and recorded bands in his L.A. studio.