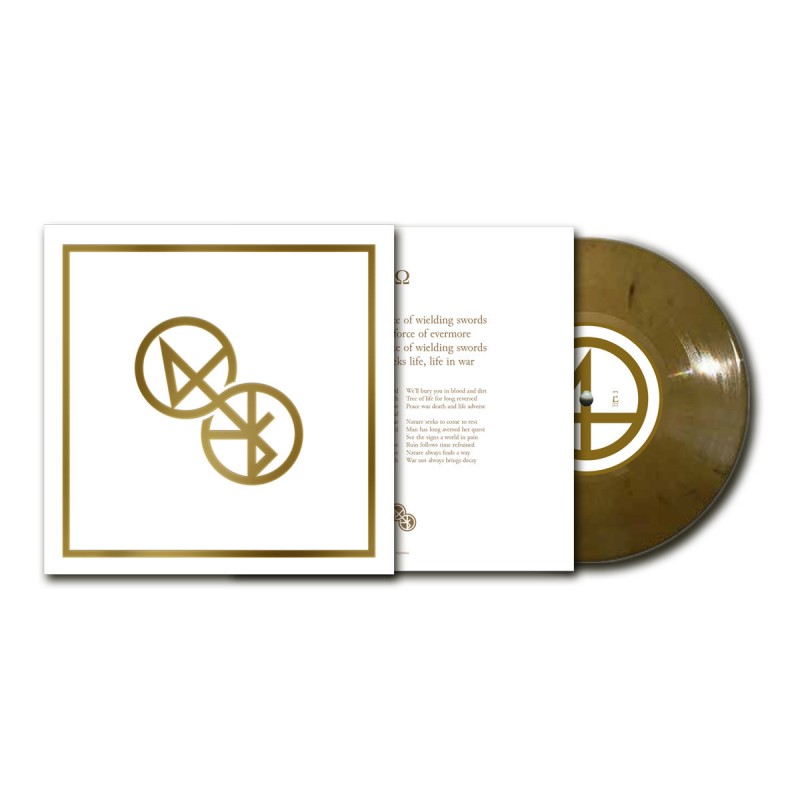 Split release from Ordo Rosarius Equilibrio and Trepaneringsritualen, with revised and exclusive versions of Ordo Equilibrio's ''Nature Seeking Equilibrium / War For The Principal Of Balance'' which appeared originally on the "I4I" Picture 7" EP (Cold Meat Industry, 1997).

The title of this ORDO EQUILIBRIO classic has always felt perfectly tailored for Equilibrium Music, and we can only return in kind and grant it the equally fitting catalog reference EQM044, as we celebrate the materializing of a long-lasting ambition to cooperate with these key figures of the Post-Industrial / Dark Folk scene.

“Nature Seeking Equilibrium (War 4 the Principle of Balance)” originally appeared in the limited “I4I” picture disc 7" (Cold Meat Industry, 1997). Back then ORDO EQUILIBRIO had not yet perished and given way to ORDO ROSARIUS EQUILIBRIO, but there was already growing evidence that the Post-Industrial ambiance of their earlier days would branch out into new territories. With the inclusion of “In The Grassy Fields...” on side B, “I4I” was in part a teaser for the 1998 “Conquest, Love & Self Perseverance” album that followed, yet the side A of the single took the martial facet of ORDO EQUILIBRIO to a zenith which has since remained for the most part unmatched.

The track instantly became a defining hymn for the band, and although its only physical incarnation was confined to a rare 7" and never again made available in any other release, the song still holds its place in ORDO ROSARIUS EQUILIBRIO's live repertoire to this day. Serving often as the closing encore to their shows, it is met with great acclaim from their devoted audiences, who for the most part join the monumental chorus that underscores the doggedly deterministic theme.

Therefore it grew obvious as time went by that the rendition known on stage, and which had evolved naturally alongside the band's sound, needed to be kept for posterity as well. With this purpose in mind, Tomas Pettersson now delivers to the world its refurbished and definitive version, which emboldens the original militant grandiosity with a polished armor while bringing it closer to ORE's current standards.

The obscure entity known as TREPANERINGSRITUALEN has also been summoned to take part in this celebratory landmark, and challenged to present the piece in its own vision. Loyal to its trademark Death Industrial style, TxRxP's somewhat primitive interpretation, on the other hand, is drenched in a murky sludge whose stench of exhumed corpses engulfs all hope that any notion of rebirth could perhaps surface from this ordeal.

Over twenty years later, “Nature seeking Equilibrium (War 4 the Principle of Balance)” continues to provide a perfect blueprint for a true Martial Industrial anthem, with the potential to unfold into substantially diverging embodiments such as these while keeping its quintessential character. These two new versions are again exclusively committed to 7" vinyl, thus retaining also the original analogue-only availability. Two different editions exist, each limited to 222 handnumbered copies: black vinyl, coming in burgundy card stock cover with black foil block printing, and red / black coloured vinyl, coming in black card stock cover with red foil block printing. A third version, also limited to 222 handnumbered copies, is now also available, pressed on gold / black coloured vinyl and housed in a white card stock cover with gold foil printing. All versions include an insert with lyrics. The time has come again to 'See the blaze of wielding swords'!