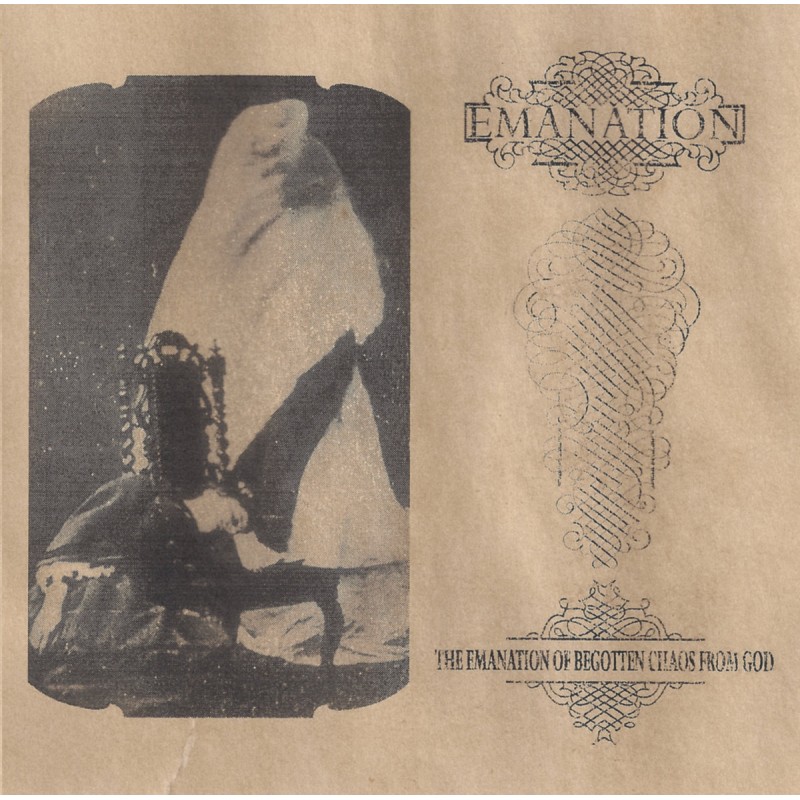 Emanation ‎– The Emanation Of Begotten Chaos From God

Emanation is a side project from CG Santos, the mastermind behind drone act Like Drone Razors Through Flesh Sphere. An intense, esoteric and surreal combination of black metal, noise and industrial with a lo-fi production and occult lyrical themes, this is not an easy listening or approachable album by any stretch but the deranged and eerie sounds produced by Santos across the debut album The Emanation of Begotten Chaos from God make it a unique and rewarding listen for those who can penetrate its strange depths.

The album is 71 minutes long and with just six tracks four of them are ten minutes and above. The first one Cyclic Metamorphosis begins with an eerie clean melody, a slow and tinny drumbeat and noisy electronics for the first few minutes before the guitars come in with a scathingly harsh tone to them, which when accentuated for the noisy electronics makes for a dense sound even with the incredibly lo-fi production. At this point the guitars seem there more for their slow and heavy texture than for the addition of any melody, until it kicks off about six minutes in with the simple drumbeat increasing in tempo,the scratching of guitar picking up the pace while an eerie melody continues in the background. Each texture is so massive and there’s a lot of layers resulting in a sound that at first sounds incredibly lo-fi, disjointed and dissonant. But repeated and active listening reveals the esoteric melodies present under the scratchy guitars and electronic din, and the lo-fi sound all gives it an eerie and caustic atmosphere, all accentuated by this dissonant layering. It’s mostly very slow and incredibly raw and dense, but the industrial noisy elements make it sound unlike most other black metal. When the vocals finally come in, a harsh scream that’s fuzzed out by effects, it’s buried quietly in the mix, and with the off-beat drums and scraping overlapping sound of the other elements it’s a psychedelic nightmare. The following track Ritual Asphyxia starts off like a Sunn O))) guitar drone fed through a dozen noise pedals, screeching and clanking with an off-beat industrial strangeness. When the vocals come in the guitar gets more furious and more twisted by these industrial elements in a harsh and inaccessible wall of effects laden blackened noise. Some slow black metal melodies shine through once again in the background, and the tinny drums are so simplistic as to seem at odds with the array of harsh textures that make up the wall of sound, and it is truly caustic and occult sounding. Just after the half way mark it all explodes into a faster pounding piece of intensely harsh and layered black metal. Ritual Asphyxia indeed.

Immortal Blood Coil relents on the heaviness with a noisy dark ambient piece, bereft of the wall of sound approach, and creates an eerie psychedelic sound with layers of synth, chimes, drums, noise and more effects laden vocals. It relents on the heaviness but not on the dark atmosphere. Synesthesia of the Lesser Sphere is the droniest of the lot, with a droning guitar wail providing the backdrop for the creaking twisted sound of the knob twiddling electronics and harsh drawn out vocals over the top. Now and then throughout the track, the guitar stops and the electronics continue by themselves, and there’s a quiet, understated but creepy melody running in the background throughout. It’s kind of like if Anaal Nathrakh decided they wanted abandon their brand of apocalyptic devastation to create some of the creepiest fucking music of all time instead.

The final two tracks Inorganic and Sands of Totemic Silence are the two longest on the album at 18 and 15 minutes respectively. The electronics on the former are so harsh, dissonant and noisy it sounds like the breakdown of some mechanic behemoth and the lo-fi trebly sound of the guitars sings its eerie black metal wail over the top with melodies that are slow to reveal themselves -it’s intelligent, melodic and caustic blackened noise. The closer starts with eerie dark synth ambient in one of the few moments that isn’t a complete clusterfuck of noise, but still sounds dark as all hell before kicking off with more off-beat drums as layers upon layers of guitar, synth and noise all drone away with a slow and deranged din, breaking down towards the end into a noisy electronic mess.

The Emanation of Begotten Chaos from God has to be one of the most original black metal releases I’ve heard in the last few years, and it’s so dissonant, surreal and nightmarish it has to be heard by anyone interested in pushing the genre’s boundaries with it’s harsh and twisted explorations – it it will take more than few listens to unravel the depths of what’s going on as it might sound like a messy din at first, but reveals itself to be a caustic and surreal masterpiece.