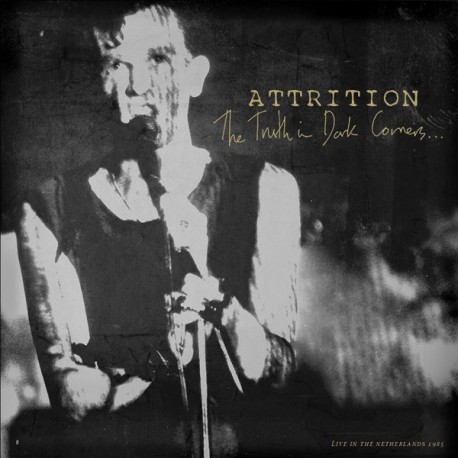 Attrition –The Truth In Dark Corners

Recordings from the Attrition april 1985 tour of the Netherlands... Many of these songs were reworked and recorded for the second album - "Smiling, at the Hypogonder club" - originally released on Third Mind records in November 1985. "The Wrecking Ground" appeared in instrumental form as the B-side to 1987's "Take Five EP. "In the Attic" and "The Aftermath" remained unreleased until now...

This is not exactly a new album, but a live recording from 1985 (!) in The Netherlands. This is the kind of ‘dated’ album that will appeal for the biggest fans of the 80s and the collectors of Attrition. We get a spoken introduction (in Dutch) to the concert featuring nine songs (on this album). It seems that Martin Bowes restored some old demo-recording from this gig in The Netherlands. The songs are mainly taken from the “Smiling, At The Hypogonder Club”-album plus some old singles as well (cf. “Shrinkwrap/Pendulum Turns”). The bonus of this album is for sure the previously unreleased songs “In The Attic” and “The Aftermath”. Both songs are rather experimental, totally fitting to the 80s musical style of early Attrition. The opening song from the concert (cf. “The Drop”) is a bit less experimental and revealing a new-wave touch. The quality of the recording (sound) is quite honest while the songs are showing early tracks like “Pendullum Turns” or yet “Hallucinator” in a different (live) version. This album is mainly recommended for the heaviest fans of the band! Notice that the pictures of the concert (on the front- and back cover) were taken by Justin Mitchell from Cold Spring Records. Back in time he was a big fan of Attrition and finally become a friend of Martin Bowes. This album is pure nostalgia.