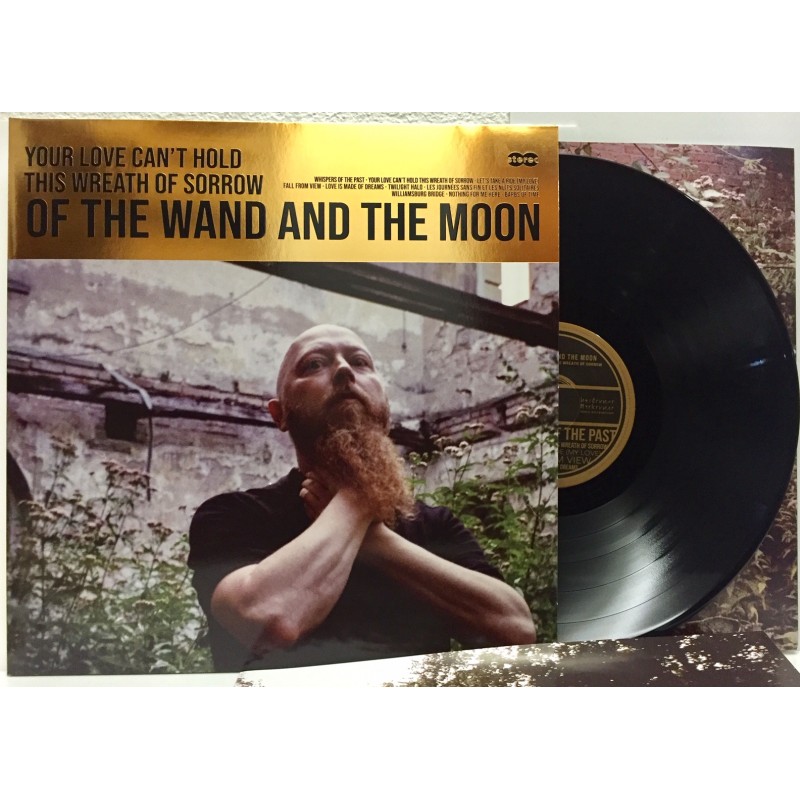 The Wand And The Moon ‎– Your Love Can't Hold This Wreath Of Sorrow ( Vinyl, LP)

The 10 new songs are a highly atmospheric, melancholic and twilightridden output, that this time clearly shows mainman Kim Larsen’s inspirations from 60-70’s singer/songwriters such as Lee Hazlewood, Leonard Cohen and Serge Gainsbourg, as well as movie soundtracks from the same period. But most importantly – developing the sound from former album “The Lone Descent” (2011). On the other hand, it still maintains some of the dark neo-folk roots of the band – but is still a huge step musically into brand new directions as well. The album also includes guest performances by King Dude, legendary Danish singer/author/artist Martin Hall (who also wrote the liner notes for the album), as well as several other household names on the Danish scene such as Uffe Lorenzen (Baby Woodrose), Bo Rande (Blue Foundation) and Sarah Hepburn (Kloster a.o.).

Of The Wand & The Moon started as a soloproject by Kim Larsen in Copenhagen, Denmark in 1998 when he was still a member and composer in doom-metal band Saturnus. The debut album “Nighttime Nightrhymes” was released in 1999 and was a dark folk/neo-folk album that received quite some attention in both neofolk, goth and metal scenes. With the second album “Emptiness Emptiness Emptiness” (2001), the sound of Of The Wand & The Moon had developed much, and is considered a neo-folk/dark folk classic these days. A lot of touring followed all over Europe, as Larsen had assembled several live-members for his touring band.

In the years to come, Of The Wand & The Moon released the albums “Lucifer” (2003) and “Sonnenheim” (2005) as well as several EP’s and vinyl singles. Slowly, the band had become one of the top acts in the dark folk/neo folk scene and played gigs and festivals all over the world.
2011 saw the release of the album “The Lone Descent”, which was a new chapter for the band. Musically, the songs on the album were a step into a new direction, with a huge, powerful and epic sound and many new influences.

“The Lone Descent” was received extremely well by both critics and followers and was the most successful album by the act so far and established Of The Wand & The Moon’s position even more. In Larsen’s native Denmark, the album was praised in several of the biggest daily newspapers. Gigs at festivals such as Roskilde Festival, Roadburn, Wave Gotik Treffen and even more touring followed in the coming years, as well as live-albums, EP’s and vinyl singles. Furthermore, Kim Larsen toured and collaborated in this period with artists such as King Dude, Anna Von Hausswolff, Offermose, as well as recording and releasing with side-projects such as Les Chasseurs De La Nuit, Vril Jäger and White Chamber.