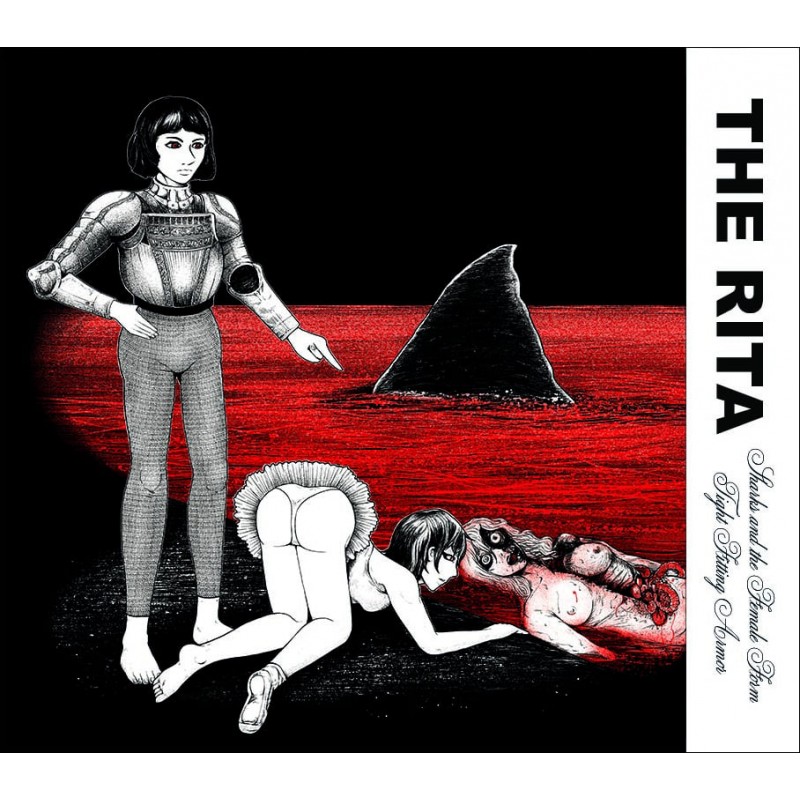 This CD is the re-edition of:
§ "Sharks and the Female Form" first out in 2018 on OEC as a Music-Cassette limited to 39 hand-numbered copies including a load of A5 inserts.
Cassette was re-edited in 2019 in a standard case limited to 100 copies
§ "Tight Fitting Armor" out in 2016 as music-Cassette together with a 12" lathe cut limited to 23 hand-numbered copies.
No need to spend much words about the muzak: what you hear is the HARSH NOISE WALL for which THE RITA is very well known!

Frontfront cover is a drawing by Japanese artist ZUKK.
Zukk design combines in a single image the imagery used for the covers of the two original cassettes.
All art in the other digipak pannels taken and re-worked from original Cassettes art-works.
But what was behind those recordings? >>>
Sharks and the Female Form
The aesthetics and patterns of a woman’s physical form violently and tragically manipulated in the arts:

Painting
“You have dared to torture the female who was so certain he would always be adored! You have scourged her, flogged her in all her pride; you have emptied her breasts, creviced her belly, blown up her buttocks, twisted her legs, battered her face! And over it all you have spread a noxious color, composed of all the reds of blood and the greens of putrefaction.”
Coquiot on Rouault’s painting Two Prostitutes (1906)

Cinema
“The verbal link between gorge (throat, bosom, breast) and egorger (to cut the throat, to slaughter) implies that the two inevitably go together: to see a breast is to want to cut a throat.”
Colin Davis from Scenes of Love and Murder: Renoir, Film and Philosophy (2009)

Literature
“The great conical head struck her like a locomotive, knocking her up out of the water. The jaws snapped shut around her torso, crushing bones and flesh and organs into a jelly. The fish, with the woman’s body in it’s mouth, smashed down on the water with a thunderous splash, spewing foam and blood and phosphorescence in a gaudy shower.”
Peter Benchley from Jaws (1974)

Tight Fitting Armor
“Jeanne went armed in white iron, entirely from head to foot.” Moreover, Guy and André de Laval saw her on horseback near Romorantin “armed entirely in white, except, for the head, a little ax in her hand, seated on a great black courser.”

The accounts of the treasurer Hémon Reguier refer to the purchase of that suit of armor in April 1429: “100 livres tournois were paid and delivered by the aforesaid treasure to the master armorer for a complete harness for the aforesaid Maid.” With this harness, Jeanne was equipped in the same fashion as the men-of-arms of her era.

Jean Chartier reported that she was “armed as quickly as possible with a complete harness such as would have suited a knight who was part of the arma and born in the king’s court. “She was equipped, moreover, like knights of a certain rank: 100 livres tournois was a significant sum."

(Diary of a Chambermaid)
"Production and costume designer Georges Wakhevitch does an excellent job with the look of the film in creating a posh yet early 20th Century look to the home as well as the clothes the people wear. Notably the maid dress and stockings that Celestine wears to woo some of the men in the film."