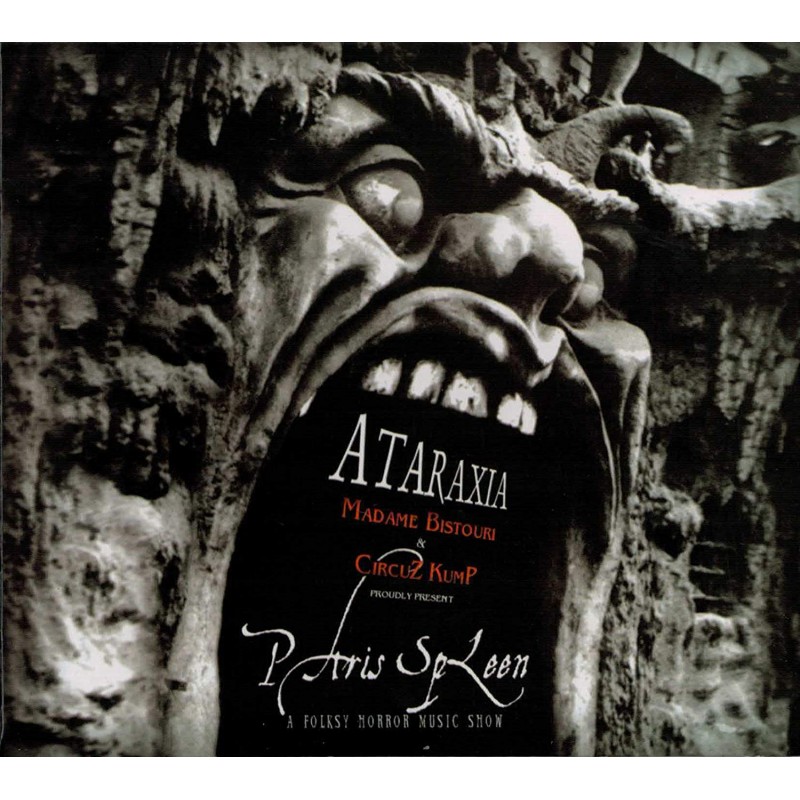 ATARAXIA in "PARIS SPLEEN", a crazy cabaret show! We are inspired by poetry, mainly the one that transforms the most turbid and tormented reality, the one of the wretches, the freaks, the buskers and the buffoons in a sort of lyrical revelation. We started exploring an historical period and environment that have always appealed to us : the 'cabarets macabres' and fun fairs of the beginning of the XXth century in Paris. And who, better than Baudelaire, has managed to portray that peculiar universe within his verses ? "The spleen of Paris" has been our guide and some of its lines have become the lyrics of our songs. Carrying out an accurate research about the 'ghost cabarets' that animated the nights of Boulevard de Clichy, we disappeared into a nocturnal environment both gloomy and sparkling of innatural colours, a distorted dimension where each mask, drama, jest and tear turned into a grotesque and amplified representation of life. Men, dogs, exotic perfumes, acrobats in decay, green-eyed enchantresses, cloud sellers, heavenly places come into existence behind the threadbare fabric of a torn curtain rather than on the unnailed planks of a worm-eaten stage. Identifying ourselves with the artists of that time, we have written a collection of songs that could have been played at the beginning of the xxth century in the Cabaret of Heaven rather than in the Tavern of Crooks. Thanks to the sound of bandonéons, musettes, trombones, violins, big-drums and cymbals and the dramatic and guttural voice of our singer, we have sung Baudelaire who, in his turn, had sung Paris of the imaginative and under-privileged artists of Montmartre. This music brings back to life the grotesque, bitter and irriverent words of "Le Spleen de Paris".