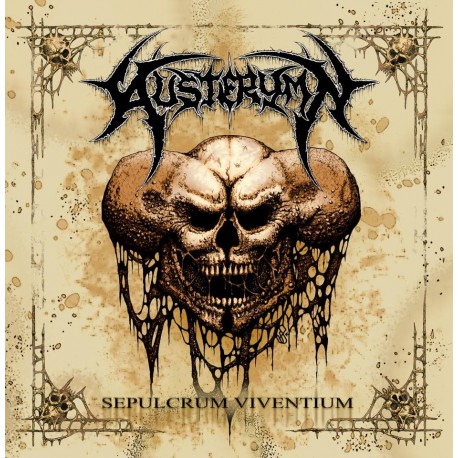 Previously known as Perpetual Infestation (1990-1991) and Godless Truth (1991-1996), these seasoned U.K. scenesters came back from the deceased in 2007 and re-christened their decayed corpse as Austerymn, only to perpetuate and pay homage to the repulsive odour of the ancient Metal of Death that runs through their utterly infected veins, most especially that from Sweden´s heydays. Unashamed proud to play a style they grew up with and love, Austerymn will definitely appeal to all fans of the crunchy and crushing -yet melodic in a not cheesy way- tone of bands like Entombed, Dismember, early At The Gates, Carnage, Grave, early Desultory, Nirvana 2002, God Macabre, early Evocation and Wombbath. Authentic old school Death Metal of the finest and classiest kind!!! "Sepulcrum Viventium", the band´s debut full-length, was recorded and produced by Fotis Benardo in Greece and Rik Simpson at The Fly Studio in Stoke On Trent (England), and features guest guitar solos by George Emmanuel (Rotting Christ, Lucifer´s Child) and Carlo Regadas (Monstrance, ex-Carcass, ex-Blackstar, ex- Devoid). Cover art by Wolven Claws Artist. Layout and design by Ola Sjöberg (God Macabre). Band´s logo by Christophe Szpajdel.