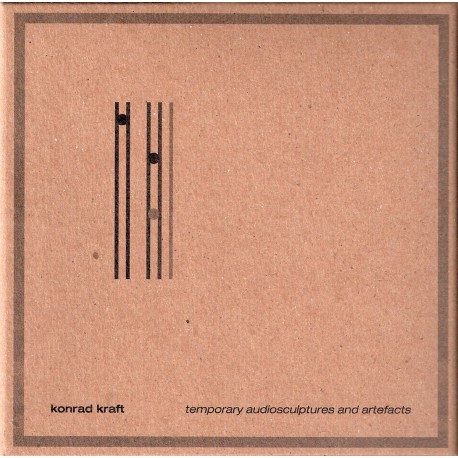 On “temporary audiosculptures and artefacts”: Trying to set musical events in a sculptural form, the Düsseldorf/Wuppertal based artist and musician Detlef Funder (a.k.a. Konrad Kraft), develops the temporary audio-sculpture. Knowing that a tonal event can never take the materiality of a real sculpture, Konrad Kraft attempts this special transformation with the help of various elements. Human imaginativeness, time, as well as the tonal event itself are the elements for the listener to form an individual audio-sculpture and to let it develop in their heads. The audio-sculpture with its acoustic body, around which various tonal/sound elements and events float, appears with a physical structure, a dimensionality. Tonal/sound elements are of various origins. In part elicited from nature, or being conjured up synthetically, or just being put together randomly, all elements are enhanced and altered sometimes significantly to the point that the character has changed completely and can hardly be identified. The term ‘artefact’ relates to the fact that sound fragments, through the synthetic alteration, are broken-up and only exist and appear as particles. They flow as ‘artefacts’ in the tonal range. It sounds like floating metallic sound units interfere with small concrete sounds in the foreground. It reminds us at times of some of the work by Illusion Of Safety, Controlled Bleediung and Cisfinitum.